Grades are in for Kansas schools: just one A, but 80 Fs

(The Sentinel) – Based on 2021 state assessment scores, only one public school in Kansas earned an “A” on Kansas Policy Institute’s A-F Grading of Kansas Schools initiative.  According to a release from KPI — the parent company of The Sentinel — nearly half of all schools received a “C,” and almost as many earned a “D.” There were only 103 schools with a “B” and 80 schools earned an “F.” 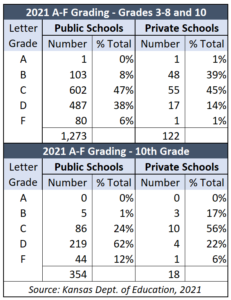 Only 8% of public schools earned an “A” or a “B,” compared to 40% of private schools.  Nearly half of the public side are D/F schools, but only 15% of the private schools.

Just one public school — Ingalls Elementary in Gray County — garnered an “A.” Ingalls Elementary caps out at the 4th Grade; if 5th-Grade students were included as in most elementary schools, Ingalls would have a “B.” Brookridge Day School in Overland Park is the only private school that earned an “A.”

Go here to find the grades for each school in Kansas.

“A-F grading is a helpful one-stop-shop to get a clear picture of what performance looks like across the state,” KPI President James Franko said in a release.  “Parents, citizens, and policymakers need to be enabled with accurate information that brings attention to the stagnant performance of too many of our schools and showcases the K-12 schools that demonstrate achievement gains.”

Grades 3-8 and 10 take the state assessment test, and the A-F Grading initiative applies a letter grade for each grade level tested in Math and English Language Arts based on test scores for low-income students and those who are not low-income.  Average scores in Level 4 on the test earn an “A,” which KSDE defines as having an excellent understanding of material and being on track for college and career.

Grade distribution varies by county, but the majority of schools in most counties have a “C;” the second-largest group in many counties has a “D,” and some counties have “F” schools. 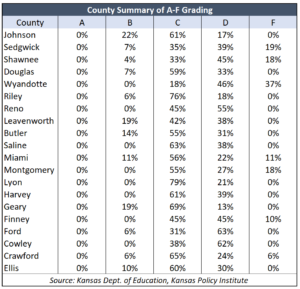 Even Johnson County — the wealthiest and most populous county in the state — had just 22% scoring a “B” and 61% at a C.

Among the state’s other most populous counties, only Leavenworth and Geary counties came close to one-fifth of their schools scoring a “B” at 19%.

A plurality of schools in some of the largest counties earned a “D,” including Sedgwick, Shawnee, Wyandotte, Reno, Ford, and Cowley counties.  Finney County schools are split, with 45%  earning a “C” and 45% with a “D.”

Ford County performed the worst, with 63% of schools earning a “D” average.

KPI scholar David Dorsey says some decline from 2019 was expected due to COVID-related disruptions, but the fall was not universal; 106 public schools and 15 private schools show improvement.  The state assessment was not given in 2020 because Governor Laura Kelly closed schools in the spring.

“Too much of the education debate treats our kids like dollar signs while achievement gaps and overall mediocrity are ignored,” Franko said.  “Our hope is that this presentation and analysis of the state-produced data not only makes the data accessible to parents but also offers accountability.”

This new report also shows achievement declines as K-12 students advance in their education careers, indicating that a lack of early mastery means that students fall further behind as the years progress.

The 2021 data also displays per-pupil spending at the building level, proving again that higher spending does not translate to better achievement.

Proficiency and college readiness has been on a slow, steady decline for many years in Kansas, while states with robust educational choice opportunities like Florida and Arizona have strong gains. 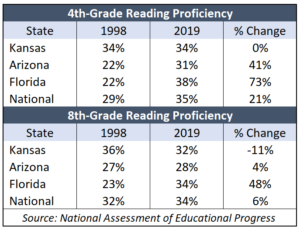 All students benefit from choice because competition to retain students compels public schools to do better.  But the Kansas National Education Administration and the Kansas Association of School Boards bitterly oppose legislation designed to promote choice, transparency, and accountability reforms.

Blue Valley and Olathe oppose legislation that simply allows students to attend a public school outside their home district because it would bring undesirable low-income students to their districts.

KNEA and the Olathe chapter of Kansas’ largest teacher’s union earlier this year sent since-deleted tweets opposing several bills in the Kansas legislature.  One is a “Parent’s Bill of Rights” and a bill that would force districts to comply with a long-time state law requiring an annual Building Needs Assessment.

“It’s imperative we work to solve the student achievement crisis while acknowledging that no silver bullet exists,” Franko said.  “If kids are not finding the opportunities they deserve, they need the chance to find alternatives that help them achieve.”