(The Sentinel) – A nationwide study of 1,100 elementary teacher training programs, including 16 in Kansas, shows more than 20% fail to provide adequate instruction in math. The numbers are worse in The Sunflower State, where 9 of the 16 programs were judged substandard.

The National Council on Teacher Quality (NCTQ) survey, two years in the making, examined the amount of time programs dedicated to math coursework and how that time is spent. Researchers believe stronger math skills among undergraduate teachers-to-be will carry over to their future classrooms, and counteract the adverse educational effects of the pandemic. States report more learning loss in math than reading, and growing gaps in achievement between low- and high-poverty areas and between majority-white and majority black schools.

NCTQ recommends that elementary teacher undergraduate preparation include 105 instructional hours in core math subjects (numbers and operations, algebraic thinking, geometry and measurement, and data analysis and probability) and 45 hours in math pedagogy, defined as the methods and practice of teaching, along with theoretical concepts of instruction.

Kansas numbers do not measure up to these standards. Per the report, the average institution in Kansas only requires 57 hours in that core curriculum, just over half the suggested concentration. The state exceeds the recommendation in pedagogy, requiring 54 hours of training. So, it appears the priority is in how to teach rather than in what to teach.

There was a “silver lining” in the research. Programs nationwide have increased time spent in elementary math coursework by 19% since 2014, the last year a similar study was conducted.

NCTQ made several recommendations to program leaders and other policymakers on how to accelerate the progress: 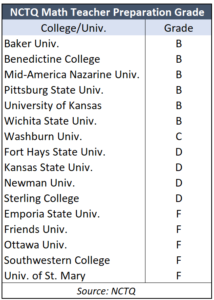 Kansas did not perform as well as the national average, with only 38% getting an “A” or “B”, but 56% receiving a “D” or “F”.  Among the state’s major universities, Pittsburg State, the University of Kansas, and Wichita State earned a “B”.  Fort Hays State and Kansas State got a “D” and Emporia State earned an “F”.

One graduate-level program in the state — Kansas State — was also surveyed; it received an “F”.

Grades are assigned based on the number of instructional hours required.  A school must require at least 105 hours to earn a “C”.

Dr. Heather Peske is the new president of NCTQ:

“We know how much math matters in setting a foundation for students. We know the biggest in-school difference we can make for students’ math learning is to make sure their elementary teachers understand key math content and know-how to teach math effectively.”