(reimaginED) – Geography lies at the heart of New York’s success almost as much as it does for the United States as a whole.

With the completion of the Erie Canal, water transport of goods from deep into the interior of the United States could reach New York City via the Great Lakes, the canal and then the Hudson. From New York City, they could reach the world.

Of course, it took money to finance such activities, and New York City became at first a national center of the finance industry. By the mid-20th century, New York City had become a global capital of finance and culture, primus inter pares among cities.

These days, however, we are witness to the city’s sad decline; the K-12 education situation continues to nudge the city ever further from its glorious past. 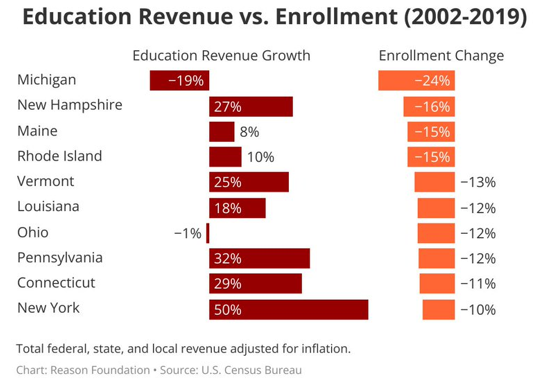 The decline started long before the pandemic. This chart from the Reason Foundation shows that New York’s statewide K-12 enrollment fell by 10% between 2002 and 2019, but inflation-adjusted K-12 spending increased by 50%. New Yorkers bore an ever-growing tax burden for a school system that enrolled fewer students over time.

This considerable increase in the tax burden might have paid dividends if the average quality of schooling in New York had improved. Instead, the long-standing migration destination for New Yorkers – Florida – improved its K-12 outcomes despite relatively constrained spending. 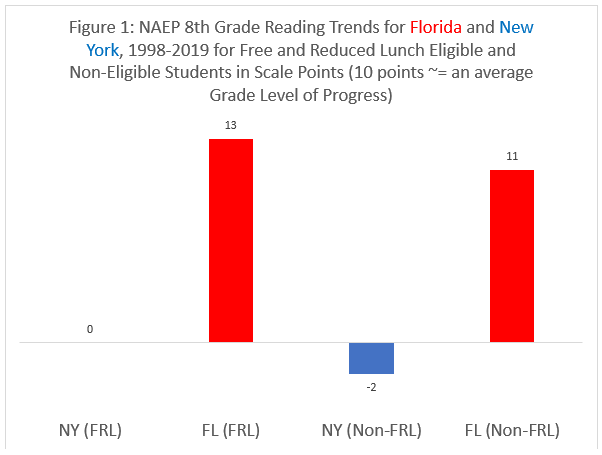 New York’s failure to improve eighth grade reading achievement was not an isolated failure. The state failed to show much improvement in outcomes in any of the main NAEP exams. Thus, New Yorkers had fewer students educated at a 50% higher fiscal burden with little to no improvement in education quality.

Strangely enough, people began finding better value propositions in other states, especially Florida. The COVID-19 pandemic accelerated many pre-existing trends, including the one where people noticed that it was not in their family’s best interest to live in New York. 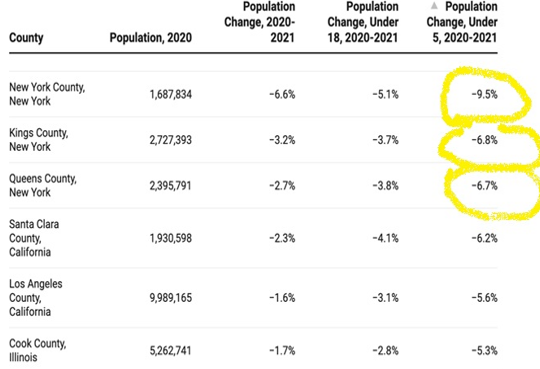 James Q. Wilson in his 1975 book “Thinking About Crime” related how many American cities fell into a cycle of decline after the creation of the interstate highway system. As people gained the opportunity to work in a city but live in a suburb, the tax base, and perhaps just as crucial in Wilson’s view, the informal community policing practices that followed, caused cities to respond in two ways: they either raised tax rates to make up for the lost tax revenue or the cut services.

Regardless of the choice made, the effect was to alienate people and increase the lure of the suburbs. Many cities thus fell into a cycle of decline.

A third option and a path out of this dilemma went undiscussed by Wilson: Cities could innovate and provide better services for lower taxpayer costs. This, however, is precisely what the unions who play a powerful role in municipal elections wished to avoid at that time.

It is precisely what the American Federation of Teachers seeks to avoid in New York and elsewhere today. Perhaps New York will correct its course at some point, but in the meantime: Welcome to Florida!