(reimaginED) – In the classic Krisis at Kamp Krusty episode of “The Simpsons,” Bart discovers that the summer camp he and Lisa attend is a de-facto child slave labor camp, prompting him to lead a rebellion and camp take over. Decades later, your author still laughs uncontrollably when recalling the “Lord of the Flies” reference in this clip from the episode.

Far less laughable is the emergence of reports from teachers concerning post-pandemic-return student behavior. A recent survey of public-school teachers conducted by The 74, a nonpartisan education news group, related:

From regular f-bombs and bullying to difficulty finishing assignments, raising hands or buttoning pants, young people across the country are struggling to adjust to classrooms after lengthy pandemic isolation.

One hundred twenty-two teachers from 37 states and Washington, D.C., painted a picture of a generation emotionally anxious, academically confused and addicted to technology, in a survey created by The 74 … Educators from coast to coast noted students had difficulty with common classroom routines — writing down homework, raising their hands to speak, meeting deadlines. And for the youngest learners, underdeveloped motor skills made it difficult to use scissors, color, paint, and print letters.

Kathleen Casey-Kirschling, pictured here, was born at midnight on January 1, 1946, making her the first American Baby Boomer. She worked as a public-school teacher and retired (ahem) 15 years ago. All of America’s massive cohort of Baby Boomers will have reached the age of 65 by 2030.

We saw declining success in the effort to replace Kathleen and her cohorts even before the COVID-19 pandemic. 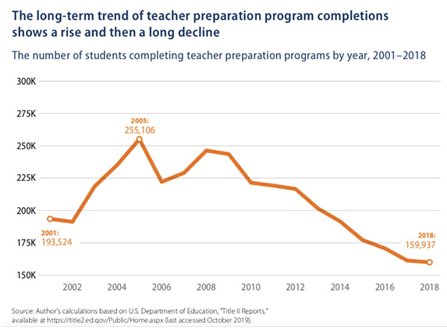 “Lord of the Flies” seems likely to simply reinforce the desire of college students to major in something other than education. With this context in mind, your author got a good, long chuckle from the absurd hysterics of Arizona passing a law to allow public schools to pay student teachers.

Said Jacqueline Rodriguez, vice president of research, policy and advocacy at the American Association of Colleges for Teacher Education:

“We have now allowed K-12 students to be placed in harm’s way with an unprepared person at the helm of the classroom by putting them in a position where they’re not only set up for failure, but it is very unlikely that they are retained in that same position, because they were not set up with the skills, knowledge, and dispositions to be successful.”

It is a tradition of long-standing to force student teachers to pay thousands of dollars and/or go further into debt while providing free labor to schools. This, however, strikes me as a tradition rather ill-suited to our current circumstances.

If districts could pay student teachers, it just might get more people to teach. Student teachers were going to be in schools whether this bill passed or not, but color me all in favor of not exploiting them.

In the end, such proposals work at the margins. The entire teaching profession must be reimagined to attract the talent necessary to allow teachers to teach and to provide the structure necessary for students to thrive.

Some states are moving forward with this, but for the rest, the beatings will continue until morale improves.