(The Sentinel) – Sir Winston Churchill once said, “A lie gets halfway around the world before the truth has a chance to get its pants on.” That has certainly been the case about claims related to school funding and Gov. Sam Brownback’s tax cut plan, including those made recently by former state senator Anthony Hensley.

Hensley made several false claims in his column encouraging Kansans to re-elect Governor Laura Kelly. He blamed Brownback for ‘devastating’ cuts to school funding, but according to the Kansas Department of Education, total spending went from $12,285 in the first budget signed by Brownback to $14,085 in the last budget before Kelly’s election. Schools filed their lawsuit in 2010 after Democrat Governor Mark Parkinson signed a budget that led to a cut in school spending from $12,330 per student in 2010 to $12,285 in 2011. Even then, that is only a 0.4% cut and hardly enough to warrant the very public cuts made by school districts. 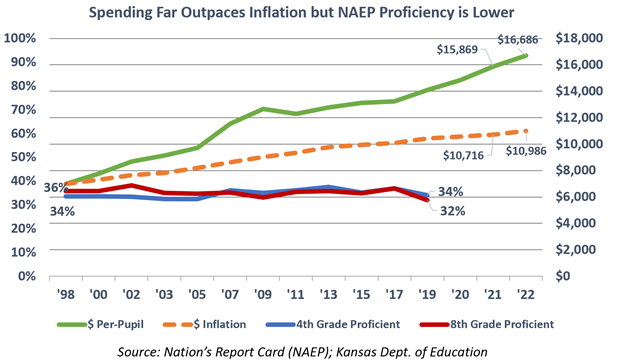 Teachers and parents endured budgetary changes during those years, but each was the choice of local school boards and superintendents. They chose to lay off some teachers instead of tapping into more than $700 million in operating cash reserves if they wanted more funding. In fact, schools increased operating reserves by $170 million during that period, meaning they didn’t spend all the funding they received.

The picture of school funding painted by former senator Hensley on behalf of Gov. Kelly is consciously deceptive, to be kind. It’s also incomplete because he is silent on what matters most in education – student achievement.

Hensley and company take the same approach as the education bureaucracy – it’s all about money and protecting the system, to the detriment of students.

What was really the matter with the Kansas tax plan?

The purpose of Hensley’s deceptions is raw politics. He blames Kelly’s opponent – Attorney General Derek Schmidt – for defending the state against the school lawsuit. But like Democrat AG Steve Six, who was in office when the lawsuit was filed, they both were simply doing their jobs. The Attorney General is duty-bound to represent his client – the State – whether directly or by hiring outside counsel.

Hensley says Kelly inherited Brownback’s “broken budget,” but he neglects to say that she had a hand in those budget problems. Brownback, the Democrats, and some Republicans refused multiple opportunities to reduce spending and balance the budget. They also would not introduce legislation to increase revenue.  As we explain in What was Really the Matter with the Kansas Tax Plan, there was a ‘burn it down’ attitude in Topeka, meaning Democrats and some Republicans wanted Brownback’s plan to fail. It had been 50 years since a conservative was elected governor, and they wanted him to be the last.

There were several other big mistakes Brownback made that were unrelated to the concept of reducing the tax burden. Perhaps the biggest mistake was cutting taxes by about $700 million while also increasing spending. Again, contrary to many claims, spending actually increased under Brownback. 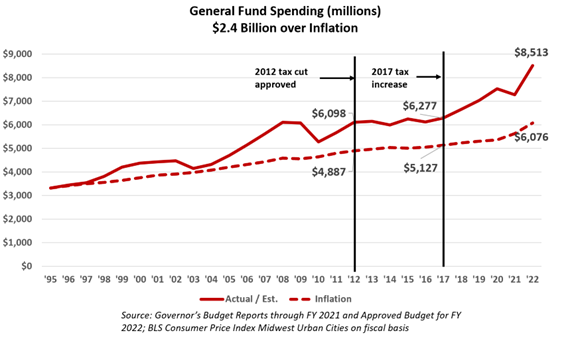 Put the focus on improving achievement, not money and politics

On both subjects – the Brownback tax plan and school spending – former senator Hensley is consciously deceiving Kansans for political gain. He is doing it to get his friend re-elected, but he’s throwing students under the bus in the process. Hensley and others only want to make false allegations about money and ignore the student achievement crisis in Kansas.

The Kansas City Star has a habit of allowing guest columnists to make false claims about school spending, and it probably won’t be the last.

Education discussions must be laser-focused on eliminating race-based and income-based educational discrimination and improving achievement for all students.