Kansans give the public school system a ‘C’; biggest concern is ‘indoctrination’

(The Sentinel) – Not quite a year ago, Kansans gave the public school system in their district a pre-pandemic grade of ‘B’ (GPA 2.8) in a statewide public opinion poll. But now, the GPA for schools near voters is 2.6 GPA, and the system overall gets a ‘C,’ with a GPA of 2.4.

The results come from polls conducted by SurveyUSA on behalf of the Sentinel’s parent company, Kansas Policy Institute, in December 2021 and September 2022. 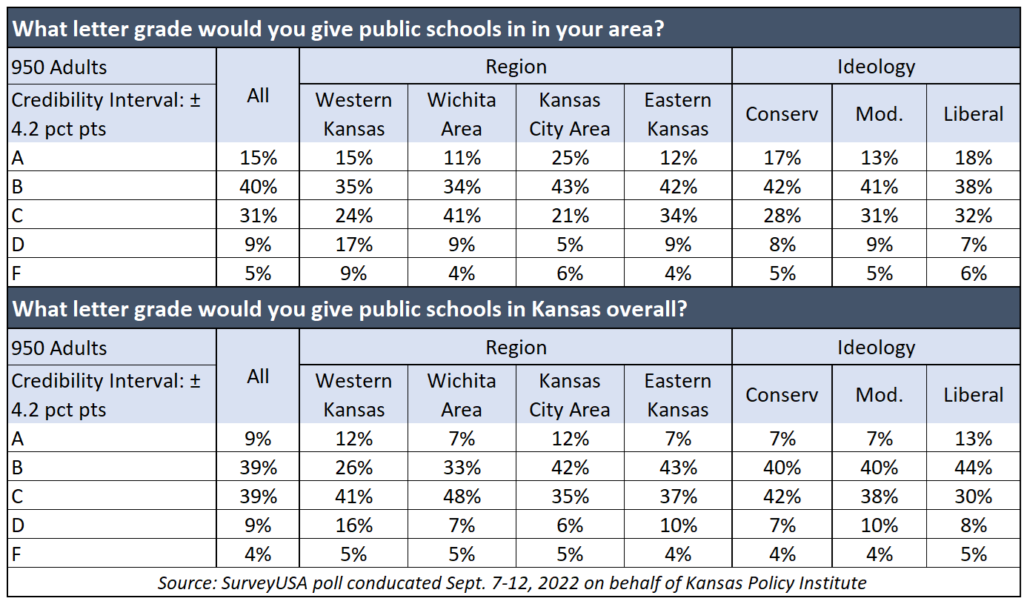 It’s likely that Kansans would give the public school system a lower grade if they all knew that student achievement is much lower than they’ve been told.

The December 2021 poll asked participants to identify the percentage of Kansas high school students proficient in math. Those who said proficiency is above 50% gave schools a 3.4 GPA, but those who gave the correct answer (between 10% and 25%) gave schools a 2.4 GPA.

That false sense of high achievement is also reflected in the September 2022 poll. In the Kansas City area, which includes Johnson County, 78% of respondents gave their school districts an ‘A’ or a ‘B.’ But parents are shocked to learn that there are more high school students below grade level in math than are proficient.

Indoctrination in the classroom is the #1 concern

Participants in the current poll were also asked to identify their biggest concern about public schools in Kansas, and the results are not surprising.

Among the options they could choose, the top concern (27%) is what is being taught in school. Many parents have expressed frustration to legislators and school board members with students being exposed to objectionable material like critical race theory and gender issues.

Funding is the #2 issue, identified by 23% of participants. Even though the Supreme Court says funding is constitutional and exceeds $17,000 per student, many school officials still complain about not having enough money.

Student achievement is the #3 concern, identified by 18% of participants. And with good reason; Kansas is below average in a nation that doesn’t perform well. Only 21% of Kansas graduates taking the 2021 ACT test were considered college-ready in four core subjects, and the most recent National Assessment of Educational Progress (NAEP) found only a third of Kansas 4th-graders and 8th-graders read proficiently.

Being able to choose the right school for their child came in at #4, but that one could be higher given the relationship between it and concerns over what’s being taught and student achievement.